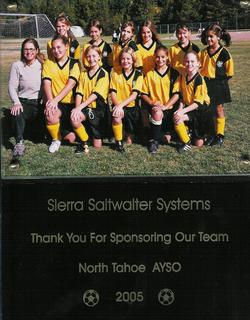 Sierra Saltwater Systems sponsored this girls under twelve soccer team coached by DeeDee Driller. DeeDee did a fantastic job coaching the girls and improvement was noted every week. DeeDee is also the North Tahoe AYSO Allstar Team coach. She will then have a few weeks off before she starts coaching childrens ski programs at Squaw Valley USA. Sponsoring a team is a great way to give back to the community and support local youth. Sierra Saltwater Systems also donated and maintains a 55 gallon aquarium located in the Bluth Learning Center at the Boys and Girls Club of North Lake Tahoe in Kings Beach. My daughter Madison is located in the front row, second player on the left.
Posted by Robert Ordway at 5:08 AM No comments: 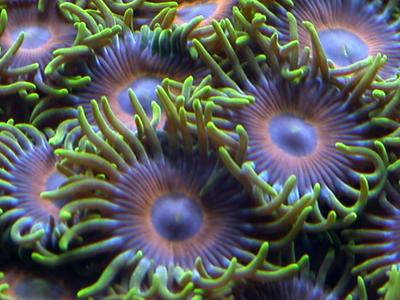 Skirt: Green, Fill: Orange/Violet, Mouth: Blue The often stunning colored Zoanthid polyp is a rapid growing soft coral commonly found in reefs around the world. Like most corals, they obtain much of their nutrient requirement from the symbiotic unicellular algae called zooxanthellae. As a result, these corals are usually found not far beneath the surface and in the aquarium they should be placed high under intense lighting. Zoanthids contain the highly toxic substance palytoxin. Palytoxin is the most toxic organic substance in the world, but there is an ongoing debate over the concentration of this toxin in these animals. However, even in small quantities, the toxin can be fatal should it be ingested or enter the blood stream. Pacific Island tribes actually used the toxin on spear tips to stun prey animals and enemies. I have read stories of people losing their sense of taste for twenty four hour periods, eye infections and of a dogs death from eating the polyps. There is no known anti-toxin. Propagation is possible and easy when performed carefully. I propagate underwater with rubber gloves in the aquarium because the toxin is very soluble in seawater.
Posted by Robert Ordway at 8:30 PM 1 comment: 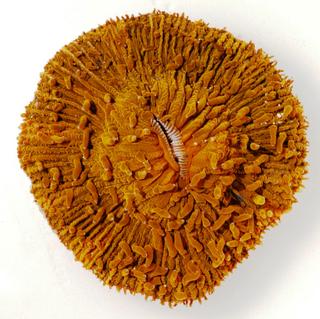 The LPS (Large Polyp Stony) Fungia is an attractive short tentacle plate coral that is often found in a circular shape. Each coral is actually a single polyp with its mouth located near the center of its dome shaped body. The fungia are some of the most colorful LPS corals found in the aquarium trade. 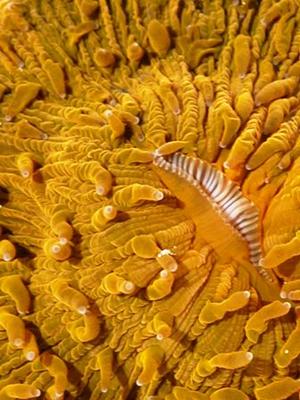 Usually found in shades of red, green and purple, they are also available in blue, brown, pink, yellow and orange. Fungia's are found on the reef slope and soft bottom free of waves and high current. Often found in large populations the family does not "sting" each other and can be found with many different species. This coral like the Helio fungia can walk the length of an aquarium, and back, until it finds a comfortable resting place. Placement of the Fungia should be taken with care because the corals movement can result in injury or death to another coral, usually never the Fungia.
Posted by Robert Ordway at 5:53 AM 1 comment: 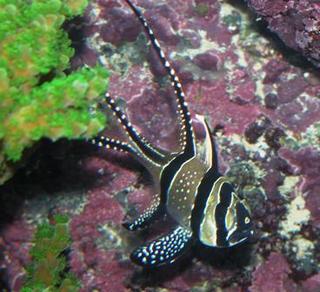 With over 99% of all saltwater aquarium fish being displaced from the ocean, it gives me great pleasure when I am able to add a captive bred or tank reared fish to a clients aquarium. Or in Kirk and Debbie's case, three captive bred Banggai Cardinalfish (Pterapogon kauderni) born and raised by Rian and Arlan, Western Marine Conference 2006 committee members, at UC Davis. The clutch was fifty-five, one of the largest in the hobby industry. If you're looking for captive bred Banggai's, Morgan Lidster of Inland Aquatics, Terre Haute, IN, Vice President of AMDA (American Marinelife Dealers Association) is a major Cardinalfish supplier. Also in the photograph is a portion of a propagated Green Slimer SPS coral.
Posted by Robert Ordway at 6:20 AM 1 comment: 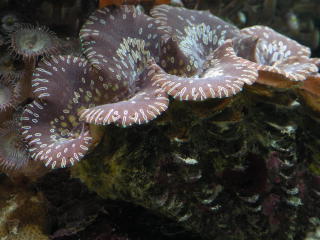 At less than a third of the size of the true giant clam (Tridacna gigas), the small giant clam deserves its name. As an adult, it has a large shell that adheres to a rock. When open, the bright blue, green or brown mantle is exposed and hides the edges of the shell with its prominent and distinctively smooth round edges. The Tridacna maxima clam is a bivalve mollusk, referring to the two valves on the mantle. 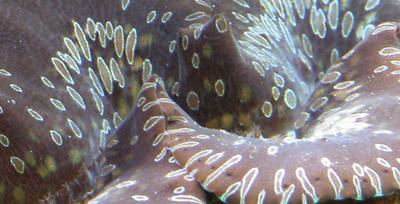 These siphon water through the body to extract oxygen from the water using the gills, and to feed on algae. Clams are relatively hardy and well suited for the saltwater aquarium. One thing that must be kept in mind when adding a new specimen to an aquarium is that clams do not react well to being moved around. It is my recommendation that a good consideration of where you want to put your clam should be decided before placing it in your aquarium.

An excellent book available at amazon.com is Daniel Knop's "Giant Clams: A Comprehensive Guide to the Identification and Care of Tridacnid Clams".

This book is the best source for information on the Tridacnid clams. The chapter on clam diseases is especially interesting, as is the information on keeping clams in the aquarium.

Daniel Knop is also the Editor and Contributing Photographer for the German magazine Koralle, Coral magazines counterpart. Coral puts out a fantastic publication on a bi-monthly basis. I subscribe to Coral magazine for my clients and they can look forward to receiving their next issue featuring Anemonefishes soon.
Posted by Robert Ordway at 4:48 AM No comments:

I took a photo of this Electric Blue Hermit crab for a friend today and while my hands were wet I got some shots of other important clean up animals. I removed each creature from the aquarium and photographed them in a small translucent container. I use a Nikon Coolpix 5700 digital camera and had pretty good results using the macro settings. 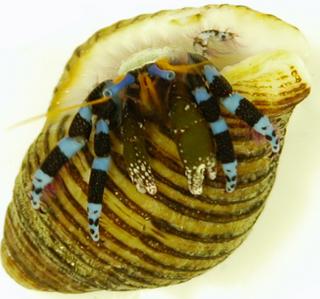 The Electric Blue Hermit Crab:The electric Blue Hermit crab originates exclusively from the Marshall Islands. This crab has electrifying blue legs with black banding, and its antennae stand out with its bright orange color. Both claws are close to being equal size, and are brownish green in color. This tiny crab lives in abandoned snail shells or it may resort to attacking and eating a snail so it can use the shell for its home.

The Electric Blue Leg Hermit Crab is a valuable addition to an aquarium because it will eat algae including green hair algae and cyanobacteria. In addition, it provides valuable aeration by sifting through the sand and it is reef-safe! 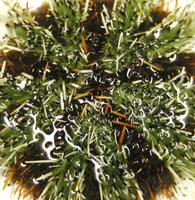 Pin Cushion Urchin:The Pin Cushion Urchin, Mespilia globulus, has an oval to round body covered with hundreds of uniform spines. I recommend an urchin be added to a reef aquarium upon initial set up to keep algaes from having a chance to get out of control. It generally hides in the rock during the day, at night, it comes out to graze on algae, moving about by its suctorial podia that are aligned in five doubled rows. The aquarium should include large amounts of live rock on which it can graze. Rock formations need to be stable and able to withstand the movement of the urchin wedging itself in crevices.

Polychaetes; Bristle Worms: With over 15,000 different types of bristle worms, some aquarium safe, some not, the novice reefkeeper is usually alarmed when they come across their first worm. Centipede like, their nocturnal behavior and their ability to hide in small holes or under objects allows many of them to go undetected. This bristle worm above out stretched is over six inches long. Often the populations in an aquarium can reach many hundreds or thousands, most of which are never seen. Although they have the potential for causing problems, generally small populations do no real harm in a reef system. A large population of bristle worms in an aquarium usually is a good sign of overfeeding.

Bristle worms are absolutely wonderful at cleaning up detrius, arguably better than ANY other creature in your reef system. Others may say to get rid of them, I for one have a pretty good track record for healthy tanks and feel they are beneficial.
Posted by Robert Ordway at 1:11 PM 5 comments: