So I really don't want to admit it, but I feel like I have been out of the loop with the what's available on the internet lately. I do spend a lot of time checking out the "local" websites, Reef Central's MARS & Reef Monkey's Sierra Reefer's forums. They provide me with a wealth of information as to what is going on with the local scene, but these three websites provide some great listening info while driving between service jobs.

These Podcasts, listed in no particular order are available to subscrbe to and download on iTunes (as well as other avenues). 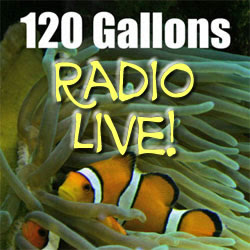 The three Podcasts include great interviews with some of the top authors & conference speakers, along with product, animal and supplement reviews.

Also included are video Podcasts of DIY's (design it yourself) projects, fragging demos, tank tours and video documentation of conference speakers. The three of these Podcasts are great learning tools and another avenue towards aquatic perfection.

Take a look at their websites, they include a wealth of information. And they are FUN! 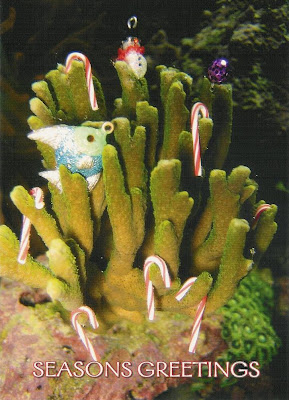 I spent a little time with my underwater camera to create this year's Holiday card for my clients and suppliers. The miniature "tree" ornaments came from minichristmas.com. The decorated coral is a Sierra Saltwater Systems propagated Montipora Digitata. I used Shutterfly to print the cards.

Montipora
From Wikipedia, the free encyclopedia

Montipora is a genus of coral in the phylum Cnidaria. Depending on the species and location, montipora may grow as plates or ridges, appearing to some as a bowl or flower. Undisturbed, the plates expand radially and may encrust over surrounding rocks, shells, or debris.

Biology
Like other corals, montipora corals are colonies of individuals, known as polyps, which are about 2 mm across and share tissue and a nerve net. The polyps can withdraw into the coral in response to movement or disturbance by possible predators, but slightly protrude when undisturbed. The polyps usually extend further at night to capture zooplankton from the water. These corals have zooxanthella, a symbiotic algae that lives in the corals' cells and produce energy for the animals through photosynthesis.

Habitat
Montipora genus corals are most common in shallow reef environments with bright sunlight and moderate wave motion. Small reef fishes, such as the hawkfish live near montipora colonies and perch on the ridges of the coral. Environmental destruction has led to a dwindling of populations of montipora, along with other coral species. Unlike Acropora corals, montiporas are more stress resistant, and not especially susceptible to coral bleaching when stressed.

In aquaria
Most montipora corals are brown, pink, or green but variants with bright colors or having a ridge color with a high contrast to the core color are more prized by aquarists. Captive propagation of montipora corals is widespread in the reefkeeping community. Able to endure varied conditions, montipora corals can be grown by enthusiasts without the use of metal halide lighting. In a well lit reef aquarium, finger-sized fragments can grow into basketball-sized colonies in 2 to 3 years.
Posted by Robert Ordway at 5:22 AM No comments: