I found this cool gadget today while surfing Marine Depot's blog. It allows you to add a background image, change the color of fish and the number of fish. You can also feed the fish by clicking on your left mouse button and the fish will swim over and eat the spot. Multiple clicks will add more food and make the fish go crazy after each spot. (Must be Reef Nutrition's Arctic Pods.) Please don't overfeed any display! You can add it as a screen saver on your computer if you'd like to customize it to your preferences HERE.

Kinda silly.
Posted by Robert Ordway at 8:46 AM 2 comments:

I recently had a client ask me to restock his 875 gallon aquarium with some more Banggai Cardinalfish since he had lost a few that I added nearly four years ago. The half a dozen that I added were from Rian & Arlan at UC Davis. See THIS post here that I did about their captive breeding success. Unfortunately the couple no longer breed the specie. 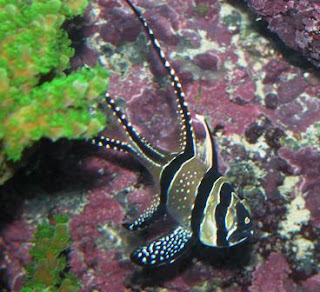 I spent good time looking for a new source of the captive reared fish and their are plenty of suppliers out there; Inland Aquatics, ORA, Blue Zoo Aquatics and Branham Aqua Farms to name a few. My clients aquarium hosts many larger species, an Emperor Angel, Niger Trigger and Powder Blue Tang and I have seen them harass smaller new fish. After being unable to secure a tank bred specie of a LARGE size I was forced to go with the wild caught fish. I spent a good time talking with a multitude of salespeople in Los Angeles in an attempt to secure a half a dozen healthy fish. So I purchased 24 fish, twelve from two different suppliers. In less than a week, I had lost all two dozen fish.

There are many articles on the web about boycotting the specie. This one located on the Microcosm™ Aquarium Explorer website sums up the problems with importing the wild caught fish the best. "The mortality rate of wild Banggais is horrible. It is not uncommon to lose entire shipments of wild fish, and the ones that survive long enough to sell seem to last only weeks. The reason is still a bit unclear, but crowding, stress and holding conditions are the primary concerns. Banggai Cardinals are imported in huge batches, and their immune systems are likely overrun by disease, possibly a newly identified virus."

With the latest Coral Magazine featuring the "Mouthbrooder" species,

I can imagine that many local fish stores will have an influx of customers looking for the specie. I hope that store owners will look into purchasing the easily bred Banggai. The male holds the fertilized eggs in his mouth through full development, and releases them as juveniles. Banggai Cardinals have a spawn size of anywhere from 12-43 fry, which develop in the male's mouth for 20-24 days. They will spawn every 30 days and it is not uncommon to observe this in the home aquarium. The juveniles emerge ready to take newly hatched brine shrimp. For these reasons, this is a species many home aquarists have bred and reared.

I will be purchasing a dozen of these wonderful fish next week from one of the suppliers listed above and will quarantine the fish until they are large enough to stock. And who knows, maybe I will be lucky enough to have a fry.
Posted by Robert Ordway at 8:13 AM No comments: 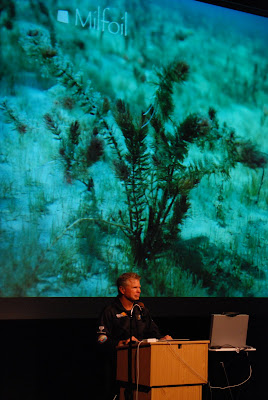 My daughter's involvement with the project is mentioned in track number 17, "Volunteer - Youth Ambassador Acknowledgments, Will Kohnen". The time spent with the UVP was an excellent way for Madison to get involved with scientists, explorers and mentors of her future. She is not completed with the UVP, Scott Cassell has invited her to accompany the group with their studies of the kelp forests of the Channel Islands in Southern California and then diving with the Giant Humboldt Squid in the Sea of Cortez later this summer. The project will return to Lake Tahoe with a submersible that will bring explorers to the deepest part (over 1.600 feet) of the lake.

To listen to Scott Cassell's talk click the play button below.

To download the talk click HERE and use the links on the left of the Archive.org page.
Posted by Robert Ordway at 7:00 AM No comments: