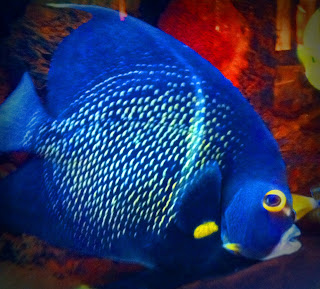 In the aquarium for a little over two weeks now, the Atlantis' French Angelfish, Pomacanthus paru, (Belize), is doing great, eating everything offered and is being a model community fish in the 1300 gallon circular aquarium.

The French Angelfish is one of three very popular "large angels" among marine aquarium hobbyists. The other two being the Emperor Angelfish (Pomacanthus Imperator) and the Queen Angelfish (Holacanthus Ciliaris). These marine angelfish are widespread throughout the Caribbean and are commonly sighted by divers in that area. This is an expensive fish, small specimens usually retail for $80-$90 USD with large adults (Show quality) costing $200 and upwards. It is also sold fresh as human consumable food, particularly in Singapore and Thailand. Reports of ciguatera poisoning exist. 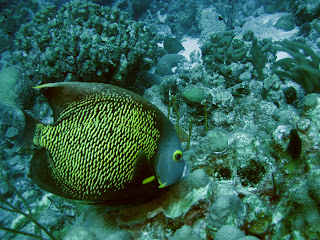 Here is a photo that I took of the French Angelfish in the wild at Bonaire's "Angel City" dive site....rightly named as seeing these beauties in the wild was an ease. Angel City has a maximum diving depth of around 80 ft and is suitable for all divers. The average visibility is 30-60 feet and access to the dive site is by shore. Also seen at this dive site was the difficult to find Longsnout Seahorse, plus many Blue Tangs, assorted Eels, Tarpon, Queen Angels, Rock Beauty's, Trumpet Fish, numerous Wrasses, Yellowtail Snappers, Porcupine Fish, Cowfish, Trunkfish, Spotted Drums, Filefish and the Flamingo Tongue Cowries. (Nothing like taking good notes after a dive!) Definitely one of my favorite dives ever! And one of my favorite aquarium fish I have ever placed.

If you are ever in the Reno/Tahoe area, go into the Atlantis Steakhouse and have a meal or a cocktail and check out this beautiful animal.
Posted by Robert Ordway at 7:16 PM No comments: