EDIT 6/2007: Bob Principe was convicted of fraud and received a jail sentence. Click here to learn more about his unethical business practices. I was fortunate to not have lossed any money in my dealings with this man, but I did spend a lot of time setting up an aquarium in his showroom and lost a bit of faith in dealing with new acquaintances. I removed the aquarium before his creditors took possession of the building. 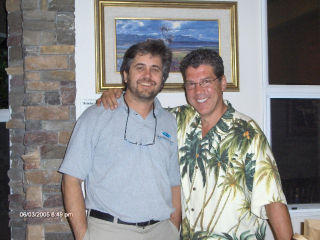 Here's a shot of myself and Bob Principe of BPTV and The Home Show Design Center... the Design Center is officially open! Although they already booked over 5 million in remodels and new home construction before their doors were open, they are now open to serve the general public as well. The Center turned out just beautiful so stop by and check it out!

See more photos of the opening night here.
Posted by Robert Ordway at 11:35 PM No comments:

With hosting help from Minh Nguyen, Assistant Dean of Technology at UC Davis, video has arrived to my blogsite. Click here to see a short pan of my 90 gallon reef tank. This aquarium has been up and running for over six years and I use it as a holding tank for my business, mainly for corals and inverts. All corals go through a half hour Lugols Solution Iodine & Salifert Flatworm Exit dip for the eradication of the Red Planaria flatworm. Lighting is two 250 watt Ushio 10K metal halide bulbs and actinic VHO fluorescent bulbs. Filtration is live rock/sand, LifeReef
Posted by Robert Ordway at 5:02 AM No comments:

Shelley Fallon, Fallon Multi Media, Kings Beach, designed this great rack card. It was was printed by DynaGraphic Printing in Reno. The card is on display at The Home Show Design Center, 780 Smithridge Dr. Suite 300 in Reno, Incline Village/Crystal Bay Chamber of Commerce in Incline Village, Hiro Sushi in Kings Beach and at Java Sushi in Truckee . (Click on image to enlarge) 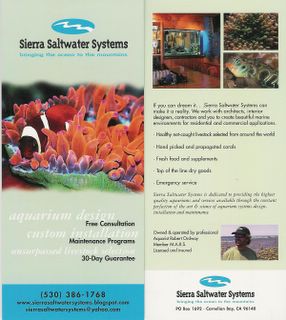 Posted by Robert Ordway at 4:28 AM No comments: