Steve Tyree, Reef Farmers, brought a very successful Southern California event to Northern California last weekend, the Bay Area Coral Farmers Market. These events feature the retail distribution of farmed and cultured corals. Steve is already eying adding a third event to the rotation in 2007. Aquacultured corals are hardier than wild caught specimens because they have already adapted to tank life. Captive reproduction is the only means of sustaining this hobby. On every level from the wholesaler and collector to the local fish store (LFS) owner, to the service industry, to the hobbyist, captive propagated corals must be demanded. 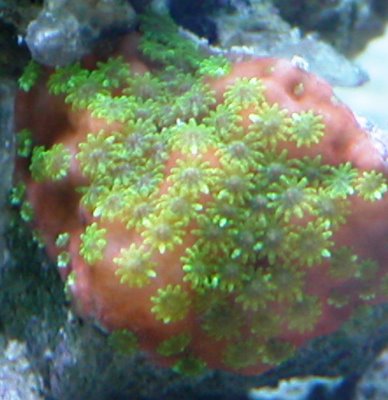 Limited Edition Green Polyped Sunset Coral I purchased this limited edition frag from Steve Tyree and reeffarmers.com mainly due to its striking beauty, but also because of the uncertainty of its specie. Polyps are twice the size of average Montipora, they extend regularly during the day. When heavily stressed the corals living tissue will retract inside the skeleton and it can appear almost completely dead. This coral however will recover from heavy stress quickly and can even encrust quickly. It should eventually become a brilliantly colored staple of stony reefs. Polyp size leads one to suspect the coral to be either a Poritidae, Faviidae or one of the larger polyp sized Montiporas. This coral was originally found by Tong's Tropical Fish of Fountain Valley California. Hugo Zuniga (SNIPERSPS) spotted the coral at the reef shop and convinced Steve Tyree of Reeffarmers and Frank Burr of Tropical Reef Oasis into a trip to Tong's Tropical Fish. The three negotiated a purchase of a small section of this coral from Tong's. The coral was then cut into three even sections. Reeffarmers acquired one of the sections and is now distributing fragments on a limited edition basis. Reef Farmers price is currently $120 per small sized fragment. The monthly limited edition reservation schedule is booked until September 2008. I hope to be able to start fragging this piece by mid 2007 after allowing it to grow to a multiple fragable piece. 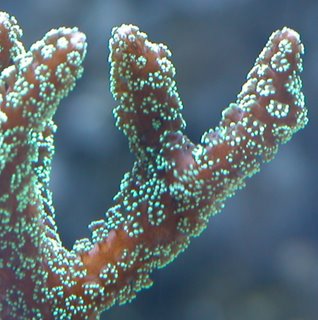 Green Birdsnest The Green Birdsnest coral is a beautiful species, originating from O.R.A and now from Ron Johncola of Reef Tec Designs and grows very thin intertwining branches. It's green coloration will grow darker in the aquarium with age. This is a relatively fast growing species, and because of its delicate branches, care should be taken in the placement of the coral in order to protect it from physical damage. The Green Birdsnest coral requires moderate lighting ranging from power compacts, VHO, T-5's up to the more intense metal halides. For continued good health, it will also require the addition of calcium, strontium, and other trace elements to the water. While it does not require additional food to maintain its health in the reef aquarium, it will feed on micro-plankton and foods designed for filter feeding invertebrates. 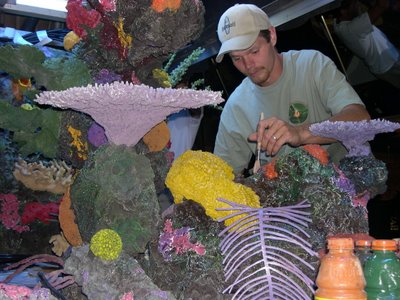 Skyler Allingham of Genesis Systems International cleans a section of the artificial reef at John Ascuaga's Nugget, Sparks Nevada, Trader Dicks 6,000 gallon aquarium in preparation to hand paint coralline algae on the rockwork. I recommended GSI to Dennis Hegemann, Chief Engineer, to create the structures that wrap Interstate 80's three freeway supports that run straight through the center of the aquarium. The aquarium is undergoing a complete overhaul with glass replacement, the new artificial reef and filtration. Look for the aquarium to be filled and stocked in late July. 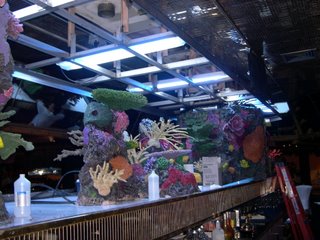 Posted by Robert Ordway at 9:04 PM No comments: