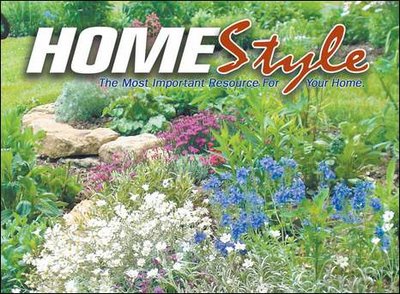 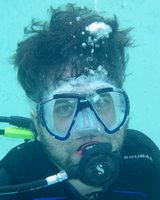 I spent last week on Kauai with my wife and daughter where we had a great time snorkeling, scuba diving, hiking and kayaking. But, it was also the rainiest weather the island had seen in the past couple of years. It actually rained over 20 inches in a twenty-four hour period! Good thing we weren't there to golf and we had a good laugh when we heard of pipes freezing in Tahoe. Eighty degree weather and rain was not too bad, and when we were underwater it didn't bother us. 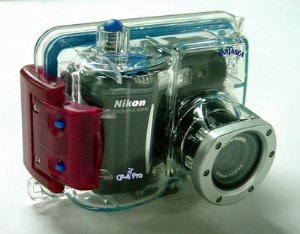 Fantasea CP4 Pro- Before we left home I purchased a Fantasea CP4 Pro underwater camera housing for my "point and shoot" Nikon 4300. It took a few snorkels to find the best settings for the camera, but overall I was pretty happy with the results. I will be buying an auxiliary flash for the camera to help eliminate the "scattering" that can be seen in some of the photos. The underwater camera also came in hand when we were kayaking. 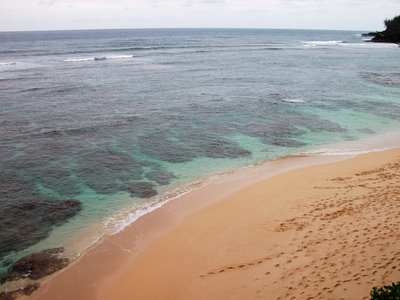 Hideaways Beach, Princeville, Kauai- Just before the entrance to the Princeville Hotel on the north shore is a wonderful secluded beach called Hideaways. A somewhat steep descent (120 foot) with the top half being steps and a handrail, turned to a muddy and slippery rope hike to the beach. When we arrived we were welcomed by nobody except a breaching grey whale and her pup. A beautiful snorkel location with a great fish community and an occasional sea turtle. 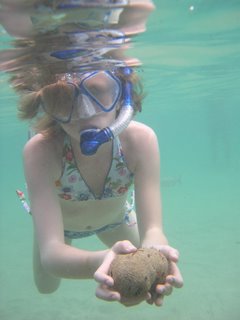 Black Sea Cucumber at Ke'e Beach- Madison shows off one of the many foot long black sea cucumbers that we saw at Ke'e Beach. Ke'e is the farthest that you can travel by car on the north side of Kauai. The black sea cucumber is a wonderful aquarium animal that I have used for years to help promote a clean sand bed. 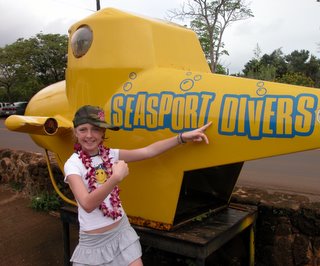 Seasport Divers, Poipu- www.seasportdivers.com 1-800-685-5889; Madison and I enjoyed a fantastic day with Kyle McDonald and Captain Hans aboard the Anela Kai. We did the PADI Discover Diving Program. Kyle made our first dives relaxing and safe. Seasport Divers is a multiple Rodale's Readers Choice Awards Winner. They were voted #1 on Kauai, and #5 in the Pacific and Indian oceans, and also rated as one of the 10 Best Dive Operators in the US, with a straight "A" rating. The experience that we shared with Seasport will definitely lead us on to certification and future dives with their company. 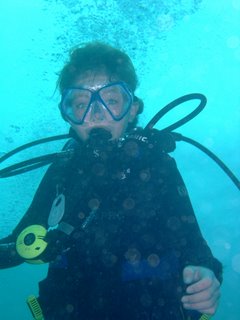 Madison shined through her pool dive and emergency training and with a little time adjusting her ears to the pressure of diving she showed no fear or trepidation in the open water. Our first dive was Stonehouse 30 to 65 feet, great site for novice to advanced divers. Named after a house that was destroyed by hurricane Iniki. You can still see some remnants of coral encrusted lawn furniture that was deposited at this dive site. Pennant and milletseed butterflies, frogfish, yellow margin moray eels, pincushion urchins and others can be found at this site. The second dive was Sheraton Caverns: The Signature dive site of Kauai. 20 to 65 feet, beginner to advanced divers, a must dive! Sheraton Caverns is on the south shore of Kauai just west of Poipu. Ancient blown-out lava tubes now consisting of gorgeous archways and overhangs is also the home to many Hawaiian Green Sea Turtles. Large whitemouth moray eels, conger eels, octopus, frogfish, spiny and slipper lobsters, shrimp, and a variety of Hawaiian reef fish all reside at this dive site. It's a dive we won't soon forget! 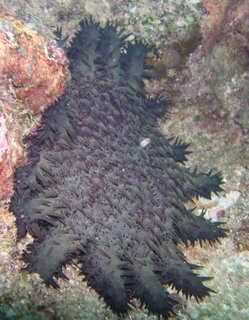 During our dive at the Sheraton Coves I came across this Crown of Thorns Starfish. The starfish is known to be destroying the coral population on the Great Barrier Reef. I recently watched a stunning program on the Science Channel, Predators of the Great Barrier Reef, that showed the destruction these animals create. The program will repeat a number of times March 9th - 11th, 2006. Set your TiVo's! The Crown of Thorns can spawn 65 million eggs in a single season. Here is a link to a story related to the increase of the specie in Hawaiian waters. Starfish Reef Predator Poses New Threat 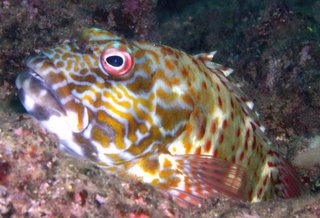 The Greasy Grouper- Trying to photograph fast moving fish proved to be a bit difficult at times with my Nikon 4300, but this guy sat and posed for me for a number of photos. The Greasy Grouper prefers clear water areas on coral reefs, juveniles have been seen from reef flats and in tide pools where the adults are usually found in deeper waters. It can be found around the Indo Pacific, Red Sea, eastern African coast south to Durban to Ryukyo Islands, northern Australia to New Caledonia. The Greasy Grouper feeds mainly on fishes, crustaceans and cephalopods. 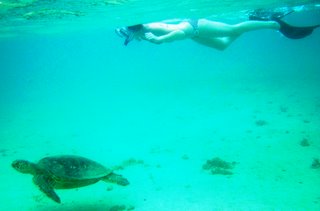 Sea Turtle at Anini Beach Park- While snorkeling at Anini Beach park we came across many Green Sea Turtles. All sea turtles are fully protected under both the federal Endangered Species Act and under Hawaii state law. These laws prohibit hunting, injuring or harassing sea turtles or holding them in captivity without first obtaining a special permit for research or educational purposes. Swimmers and divers should be aware that riding sea turtles is illegal as it puts the animals under unnecessary stress. Fines for violating these laws protecting turtles can be as high as $100,000 and may even include some time in prison. We kept a safe distance from the turtles, but this turtle didn't seem to mind Madison checking it out from above. 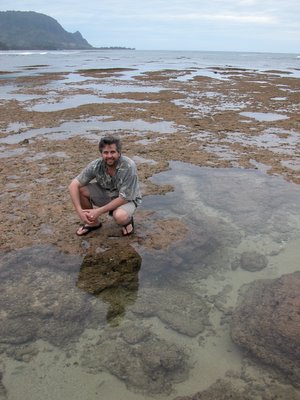 Princeville Hotel Tide Pools- We stayed a portion of our vacation in Princeville which has some of the best tide pools on the North Shore. We saw many urchins, gobies, butterfly fish, damsels, crabs and sea cucumbers. In the background of this photo is Bali Hai. Clever photography turned the peak into the mystical island Bali Hai in the movie South Pacific. In ancient times men would climb the 1,600 foot peak carrying spears. When it got dark, they would light the spears and hurl them toward the ocean below. The spears were designed to leave a fire trail behind, and the light show was immensely popular.
Posted by Robert Ordway at 11:53 PM 2 comments: